In 1973, co-founders Mike and Henriella Perry decided to relocate from the city of Huntington, West Virginia to a farmhouse on the outskirts of town. It was here they discovered the seed that would birth a dream in the old, hand-hewn logs hidden behind the farmhouse walls.

Efforts to understand the tools and techniques involved in building a log cabin, coupled with their hobby of antiquing, led to the genesis of what would become Heritage Farm Museum & Village. Originally a private collection housed in a nearby barn, they soon began to accumulate authentic period structures and materials that they felt would convey an appreciation for everyday life in Appalachia from the 19th century to the present.

Heritage Farm began with the first "Spring Festival" on May 4, 1996. This yearly event was the only day the village was open to the general public until 2006. Since then, The Farm has added a petting zoo, working saw mill, and Artisan Center, housing the Heritage Farm Artisan Guild.

Heritage Farm Museum and Village has won many awards over the years, most notably recognized as a National Geographic Traveler Prime Destination, Daughters of the American Revolution Medal for Historic Preservation, and selected as the site for two History Channel features, “America’s Greatest Feud” Hatfield McCoy Documentary and “American Pickers”.

Artisans and re-enactors bring Appalachian history to life during special Way Back Weekends Saturdays in May through December, when thousands of people from around the world learn from the past, appreciate today, and dream for the future. With over 500 acres, 5 miles of hiking trails, artisan workshops, and new attractions on the horizon, Heritage Farm Museum and Village is proudly positioned to serve Appalachia for many years to come. 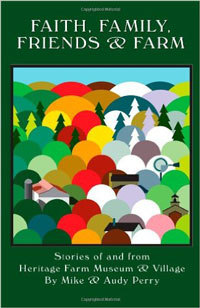 To read more about the story above you can buy Mike Perry's book Faith, Family, Friends, and Farm: Stories of and from Heritage Farm Museum & Village at Amazon!

Our Sponsors and Partners

Fill in the fields below to recieve our email newsletter